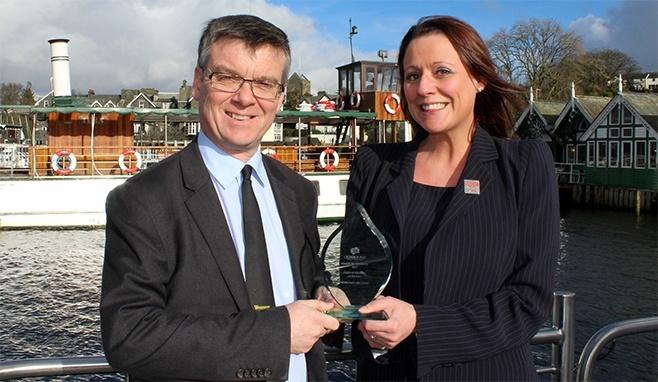 Windermere Lake Cruises has brought a top award back to Cumbria after scooping the accolade at UKinbound’s annual Awards for Excellence.

UKinbound is a leading national trade association and the award for its 'Regional Member of the Year' applauds Windermere Lake Cruises’ contribution to growing the number of international visitors heading to the UK over the past 12 months.

The result was unveiled at a glittering gala dinner at the National Museum Wales, with Cumbria’s most visited tourist attraction beating off stiff competition from large-scale tour operator Cashel Travel.

The 'Regional Member of the Year' was the last main award of the night and was voted on by UKinbound members from around the country.

Sales and Marketing Director for Windermere Lake Cruises, Jennifer Cormack, says, “We are thrilled with this award, particularly as the winner was chosen by fellow tourism businesses from across the UK. That’s really important because it’s all about working together across the tourism sector to attract both domestic and overseas visitors, not just for the benefit of our business but also the Lake District, Cumbria, as a whole. It is vital that we continue to use this collective approach to generate interest from visitors and maxmise the renewed global profile World Heritage status has given us.”

Deirdre Wells OBE, CEO UKinbound commented, “Our awards are an opportunity to give deserved recognition to businesses that have excelled in their sector during 2017, and we’re delighted to name Windermere Lake Cruises as Regional Member of the Year. All of our members have shown a positive contribution to the UK inbound tourism sector, and these awards allow us to highlight a number of standout performances.”