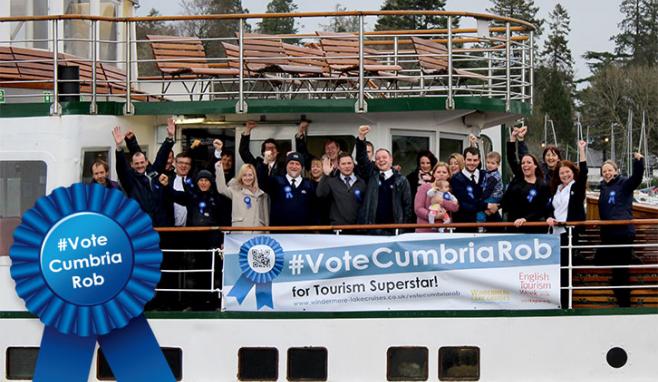 A Lake District boatman nominated as VisitEngland’s ‘Tourism Superstar’ is taking to the campaign trail to help drum up public votes from across Cumbria and the North West.

27 year old Rob Beale is the only nominee in the North West to make the national shortlist of the competition, which celebrates the dedication and passion of people working in the tourism industry. People can vote for Rob via the VisitEngland and Daily Mirror websites until the end of February, and ahead of half-term week, he’s been out and about to help attract extra support from residents and visitors alike.

One of Windermere’s famous ‘steamers’ MV Teal has been kitted out with a 12 foot (3.6m) long banner, while staff, family and friends have donned election-style rosettes to encourage people to #VoteCumbriaRob. Colleagues from Windermere Lake Cruises have also started an online social media campaign, as well as creating posters and pop-up signs for the company’s ticket offices, piers and partners visitor attractions.

Rob Beale says, “The support I’ve been getting is phenomenal and it’s great to be part of a good news story for this part of the world. I’m so proud to live and work in such a beautiful part of the country and it would be great to win not just for Cumbria, but on behalf of the whole North West of England.”

Rob is one of the youngest employees to regularly skipper an historic ‘steamer’ on England’s largest natural lake and is well known for his warm welcome and in-depth knowledge and passion for Windermere, its boating heritage and wildlife. An avid photographer of Windermere and the surrounding area, he is a keen researcher into the Lake District’s proud boating heritage and has also written three books on the history of Lakeland steamers.

The winner of the national Tourism Superstar title will be announced during English Tourism Week (5-13 March 2016).