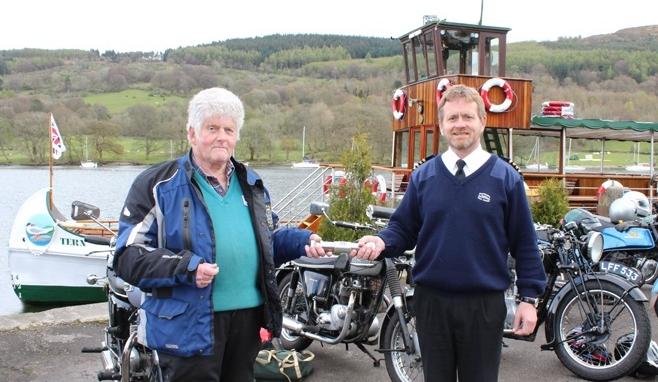 Two of Cumbria’s most iconic visitor attractions have been playing host to a very special anniversary baton as it wends its way round the country on a three month celebration tour of Great Britain.

The Vintage Motor Cycle Club (VMCC) – which has 17,000 members in the UK and overseas – is marking its 70th anniversary with a Baton Relay taking in locations across England, Scotland, Wales and Northern Ireland. The tour started in Warwickshire earlier this month, with the baton being passed between members of the Lakeland VMCC as part of the Cumbria leg of its epic journey spanning almost 4,000 miles.

After a night at Carlisle Castle and a trip over the Kirkstone Pass, the baton made it to Bowness last night. Then it was officially passed to the skipper of Windermere’s most historic vessel MV Tern for a sailing down to the southern tip of England’s longest lake.

Fittingly, Tern is itself celebrating its 125th birthday this year and is no stranger to baton relays, having also carried the Olympic torch in the build up to London 2012 with the same skipper, Ken McCloud.

The VMCC Anniversary Baton was met at Lakeside Pier by John Silcock, Chairman of the Lakeland Section of the VMCC who – along with local motorcycling enthusiasts – rode with it to the Lakeland Motor Museum. It spent the night at the Museum, alongside the attraction’s collection of 80 classic and vintage motorcycles, before heading off over Wrynose Pass and down past Morecambe Bay for the onward journey into Lancashire.

Edwin Maher, Director of the Lakeland Motor Museum, says, “We are delighted the Vintage Motor Cycle Club invited us to take part in this very special anniversary celebration. Over the past few years the Museum’s vintage motorcyle collection has grown significantly, so it was the perfect pitstop on the baton’s epic trip around Great Britain.”

Colin Steer, Secretary, VMCC Lakeland Section, adds, “We are very pleased to team up with our friends at the Lakeland Motor Museum and Windermere Lake Cruises, to partner our anniversary with that of MV Tern. Our activities and interests complement each other rather well; our thanks go also to the 70th Baton Rally sponsors, Bonhams, and Footman James.”