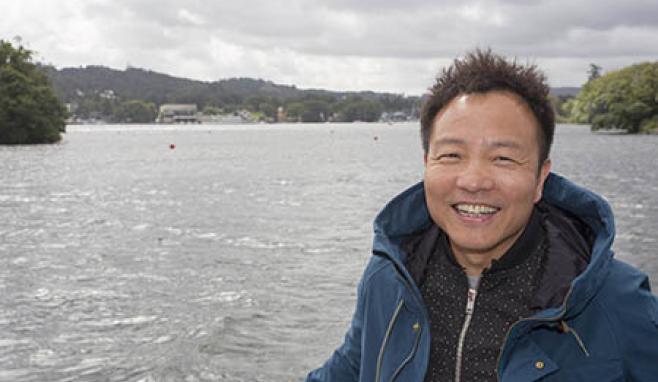 One of the best known rock singers in China, XU Wei (许巍), made a special sailing on Windermere on Monday 11 August, as part of a whistle-stop tour of the UK.

An award-winning songwriter, guitarist, producer and poet, XU Wei is a well-known celebrity in China and has been visiting England’s longest lake as part of a tour arranged for VisitBritain’s GREAT campaign. He is travelling through the country with China’s Travel Channel, an influential TV station broadcasting to 40 million people. Windermere Lake Cruises was chosen for the Lake District leg of the visit, which is taking in a range of destinations over the next few weeks including London, the Cotswolds, Liverpool/Manchester and Scotland.

Although not a familiar face in the UK, XU Wei has been in the music business for almost 20 years, with 6 studio albums under his belt and sell out concerts in seven major Chinese cities.

For his visit to the Lake District, XU Wei travelled on a modern launch from Bowness to Ambleside, alongside his celebrity team and three TV crews, before heading north to Edinburgh for the next stage of his UK tour. A series of ten 30 minute episodes will be produced for China’s Travel Channel after the trip and broadcast in October. It’s expected the visit will also feature on a portal website and instant messaging service called Tencent QQ – with a massive one BILLION users – and Iqiyi.com, a well-known Chinese social networking and video site.

Bill Bewley, Chairman of Windermere Lake Cruises, welcomed Xu Wei to Windermere. He says, “Over the years the Lake District has acted as an inspiration to poets and artists alike, and hopefully this spectacular landscape will also inspire XU Wei. This visit was a fantastic opportunity to welcome not only a celebrity known to millions of people in China, but also to showcase Windermere on Chinese TV and social media – positioning a ‘steamer’ cruise on the lake as a quintessential experience among prospective visitors from one of the world’s largest economies.

“As a business, we’ve seen a definite increase in the number of visitors from China over the past couple of years and the potential volume of people from this global powerhouse is immense, so this visit is another great way to help raise the profile of the Lake District as we continue building towards 2015.”