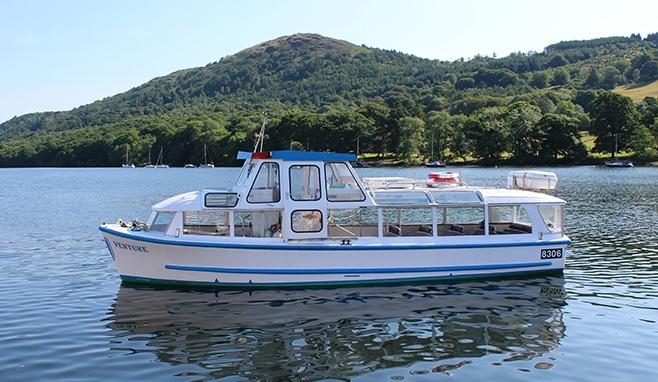 One of Windermere Lake Cruises’ historic passenger boats has gone electric for the first time – and will take her maiden voyage as an all-electric vessel this Saturday 30 June 2018.


MV Venture, which was built by local boat-builder Alan Brockbank and his team in the late 1960s, has been given a cleaner, greener lease of life with a new electric engine.

The 45-seat, eight tonne vessel has been a familiar sight on England’s largest natural lake for more than four decades and has been providing a regular ferry service between Lakeside and the National Trust’s Fell Foot Park on the shore of Windermere for the past ten years.

Venture’s new engine will emit zero carbon emissions and will offer smoother, quieter journeys for people making the frequent sailings across the lake.

Windermere Lake Cruises already has a fleet of 42 self-drive electric motor boats, but this is the first time any of the lake’s larger passenger boats have been converted to the new technology.

Operations Manager at Windermere Lake Cruises, Russell Bowden, says, “It’s important to move with the times and updating Venture with the latest electric technology will help us strike the right balance between preserving this historic vessel’s special heritage and modernising her for the future.

He adds, “Converting our self-drive boats to all-electric has proved very popular and has provided us with the model to move ahead and try out an electric engine on a larger passenger boat.”

Venture is not the first electric passenger vessel on Windermere. During the 1920s George H Pattinson ran three electric launches on the lake Rose, Thistle and Shamrock. Power was hydroelectric. Thanks to the Electric Boat Association and Kevin Desmond's book "Electric Boats and Ships: A History" for this information.