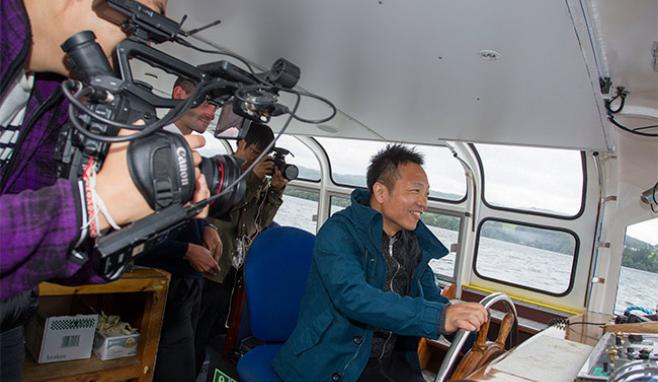 The wonders of Windermere will soon be beamed to millions of people across the globe, thanks to a flurry of international TV crews descending on England’s longest lake.

In the last few weeks alone, broadcasters from China, Australia and Japan have been among those to jump on board Windermere Lake Cruises for a quintessential ride on a Lake District ‘steamer’.

World Traveller TV, known as the ‘Rolls Royce’ of Chinese media, recently made Windermere Lake Cruises one of their first ports of call as they filmed across the north of England for a new travel and tourism documentary. The channel, which distributes to 30 local TV stations with a staggering total of five million viewers, will screen the programme later in the autumn.

Australian production company Nine Network have also been filming on an ‘Islands cruise’ for an episode of the TV travel series, Getaway, which will be screened later this year.

Other broadcasters to sail on the lake in recent weeks include two Japanese TV channels, which sent their cameras to the Lakes as part of new travel programmes focusing on the region’s landmarks, culture and key attractions. Translated as ‘Travelix’ and ‘Enchanted Train Journey’, Windermere is again showcased at the gateway to the English Lake District.
Jennifer Cormack is Sales Manager at Winander Leisure, which owns Windermere Lake Cruises. She says, “The fact that so many overseas broadcasters have been contacting us in recent weeks shows just how popular Windermere and the Lakes are with international visitors. It underlines the enduring appeal of all the Lake District has to offer and shows that a lake cruise really is regarded as a ‘must do’ activity for a diverse range of visitors from countries around the globe.”
Research from VisitBritain has also previously shown that a ‘steamer’ cruise in the Lake District is one of the top ten dream activities for international visitors heading to British shores – alongside the likes of London Eye, Edinburgh Castle and shopping on Oxford Street.

In total, there are around 1.4 million passenger journeys on Windermere Lake Cruises each year, with around 20% coming from locations outside the UK. The company also translates its information leaflets into 17 foreign languages to cater for key overseas markets.