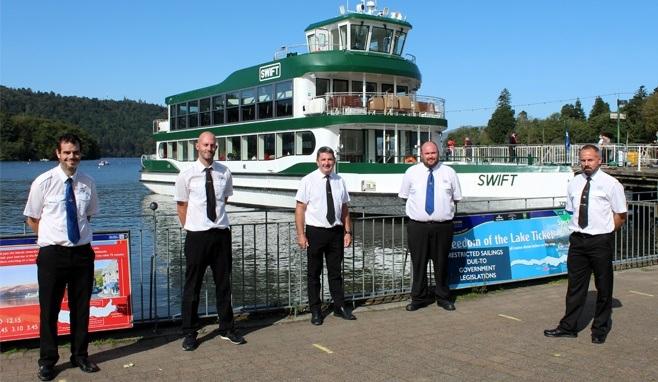 Five Windermere Lake Cruises Masters are set to begin their training to skipper the ‘MV Swift’, the biggest new vessel to be launched onto the lake in 80 years.

With 32 years’ experience of working for Windermere Lake Cruises between them, Rob Beale, Mihai Nichita and James Ellis are undergoing intensive training to enable them to sail as Master of the ‘MV Swift’, after lake trials for the 300 seat new build commenced today (Thursday). Completing the first group of boatmasters to undergo training are Operations Managers Nick Thompson and Tony Stockton.

In common with Windermere Lake Cruises’ existing ‘steamers’ MV Swan and MV Teal, the new vessel boasts three decks, but is slightly shorter in length to enable access to smaller jetties on Windermere to help support other businesses in the area.

Operations Director of Windermere Lake Cruises, John Woodburn says, “We are really pleased to announce the members of MV Swift’s first crew, all of whom have demonstrated tremendous levels of commitment and enthusiasm over the years. The new vessel has been designed to operate in all seasons and will sail every day of the year except Christmas day. This new addition to our fleet will enhance the visitor experience thanks to 21st century quality, comfort, and accessibility, and we know this fantastic new vessel will be in safe hands.” 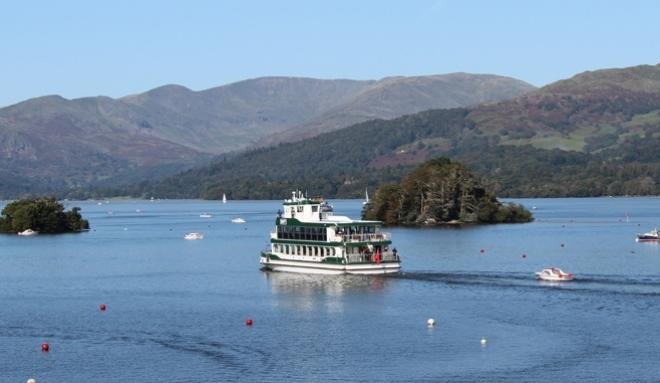 Rob started working for the company in 2008, at the age of 19, and qualified as a boatmaster in March 2010. Since then, he has worked as a launch crewmember, skipper and more recently became a mate/engineer on the ‘steamers’, based at Lakeside. He is well-known locally for his encyclopaedic knowledge of the entire Windermere Lake Cruises fleet – a fact further evidenced by the release of his award-winning book, “Lakeland Waterways”, in 2015.

Both Mihai and James joined Windermere Lake Cruises in 2010 as seasonal crewmembers and, like Rob, secured permanent positions and then qualified as boatmasters. Since then Mihai and James have worked as launch Skippers, based at Waterhead Pier Ambleside, and Bowness, respectively. Between them Nick and Tony add a further 60 years of experience to the team.

MV Swift has recently undergone commissioning of all the onboard engineering equipment, including the generators, azimuth thrusters, bow thruster, pumps, safety and navigation systems. Other commissioning work carried out also includes testing the passenger amenities, which include heated windows, electric doors and windows, USB sockets and bar/catering facilities. Today, MV Swift was taken out onto the lake for her ‘sea trials’, or in this case, lake trials, in near-perfect weather conditions. These lake trials included the measurement of the cruising speed, turning circle and included a “crash test”, which demonstrated the vessel’s emergency stop capabilities. 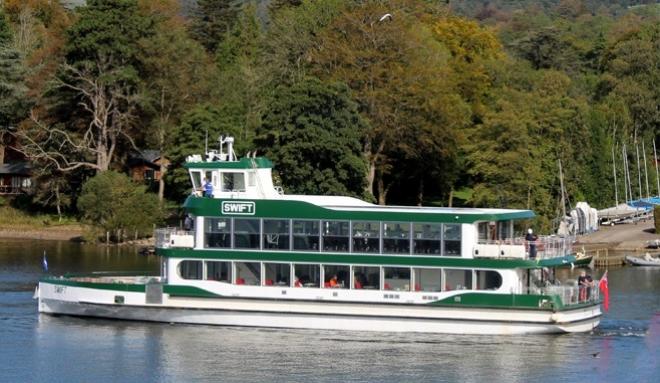 Excited at being given the opportunity to step onto the bridge for the first time, Rob Beale is relishing the prospect of sailing as Master of a completely new class of vessel on Windermere. He says, “MV Swift is fitted with an entirely different steering and propulsion system to that of the other 16 vessels in our fleet. Rather than having the traditional rudder and propellers, Swift is fitted with two azimuth thrusters, which allow much greater manoeuvrability.”

The azimuth thrusters are an electrically driven, steerable propulsion system, which use a submerged pod and propeller outside the ship’s hull. The propellers can be rotated through 360 degrees, thanks to the absence of a traditional propeller shaft. Manoeuvrability is further enhanced by a bow thruster, which allows the bow of the ship to be moved to port or starboard.

Mihai Nichita says, “Rob, James and myself will be fully trained before we take passengers out for MV Swift’s maiden voyage and I am really looking forward to working with the shipbuilder’s training team to learn the new systems. I’m delighted to have been given the chance to try out this new vessel and am really grateful for the opportunity.”

If all goes well with the testing and commissioning the vessel will be handed over by Damen Shipyards Gorinchem BV in late September 2020 and the Maritime and Coastguard Agency will test the capabilities of both the vessel and crew before issuing the Passenger Certificate. It is hoped that the ‘MV Swift’ will be available to carry its first passengers later this autumn. Further announcements will be made in the coming weeks.