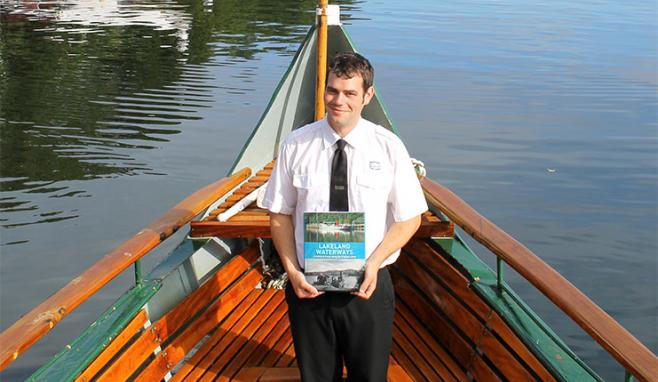 Lakeland Waterways celebrates a history of travel in the English Lake District, including Windermere, Coniston, Ullswater and Derwentwater. With a wealth of archive photography and previously unpublished research, it gives an insight into sailing on the lakes from the Romans and Vikings right through to the present day.

The book was officially unveiled today, Tuesday 1 September 2015, aboard Windermere’s most historic vessel, the MV Tern, which has operated on Windermere since the 1890s. It has been written by Robert Beale, who is currently second in command on the famous ‘steamer’, and his co-author Richard Kirkman.

26 year old Robert, who is originally from Silverdale, has worked with Windermere Lake Cruises since 2008 and published his first book Steamers of the Lakes in 2011.

He says, “This book has been a labour of love. I spent more 7 years researching historic documents including timetables, guidebooks and newspapers, as well as talking to skippers with intimate first-hand knowledge of all four lakes.

“These waterways have provided important transport lifelines over hundreds of years, linking lakeshore communities and supporting the development of local industries. Everything is included, from small 12 seater launches to car ferries and steamers capable of carrying more than 700 passengers. A lot of other books have concentrated purely on the steamers, so it has been great to concentrate on the smaller operators too, particularly on Derwentwater. Richard Kirkman’s support has also been invaluable, as his main interest is the railway system and this has obviously played an integral part in the development and enjoyment of pleasure cruises across the Lakes.”

Margaret Reid, Curator of the new Windermere Jetty (formerly Windermere Steamboat Museum) was among the special guests at the launch. She says, “It’s so important that the rich heritage of the Lake District’s vessels is recorded and that research like this is made widely available. We’re really excited about the publication of this new book.”

Lakeland Waterways has been published by Lily Publications and is now stocked on Amazon. It is also available from a range of Cumbrian retailers at a cost of £19.95.