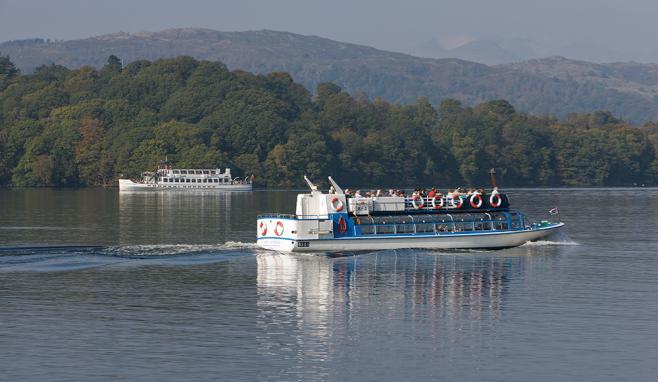 New research commissioned to find out which ‘only in Britain’ activities people from around the world would like to do on their holidays has highlighted a ‘steamer’ cruise in the Lake District as sixth on the list. That’s according to a new report just issued by national tourism body VisitBritain.

10,000 people were interviewed as part of the research into UK tourism trends, including around 500 from each of 19 countries around the world. Although the perennial favourite of “visiting Buckingham Palace” was the most popular choice for overseas visitors, a ‘steamer’ cruise in the Lake District came out sixth, with 17% of those questioned overall placing the experience in their top three “dream activities” while visiting Great Britain.

A lake cruise was the stand-out favourite for Turkish visitors, who made it their number one choice – above the likes of the London Eye, Edinburgh Castle and shopping on Oxford Street. A host of other nationalities also placed it in their top five things to do, including the Japanese, South Koreans, Polish, South Africans and Canadians.

More than 20% of passengers travelling with Windermere Lake Cruises come from locations outside the UK. In total, the company hosts around 1.3 million passenger journeys annually and currently operates three iconic steamers on England’s longest lake; MV Tern, MV Swan and the largest vessel ever built for Windermere, MV Teal. Most recently, Teal was in the spotlight after she welcomed Her Majesty the Queen and Her Royal Highness The Princess Royal aboard earlier this summer.

Managing Director of Windermere Lake Cruises, Nigel Wilkinson, says, “It’s great to see that so many overseas visitors recognise that the UK has plenty to offer outside London. This latest research demonstrates the enduring appeal of the Lakes and shows that a ‘steamer’ cruise really is regarded as a quintessential experience for prospective visitors from a wide variety of countries around the globe.

“That said, we do face stiff competition from destinations across the UK. So as we look forward to 2014, we want to continue building on the reputation of the Lake District and make the most of every opportunity to help encourage visitors to experience the great tourism offer outside the Capital.”