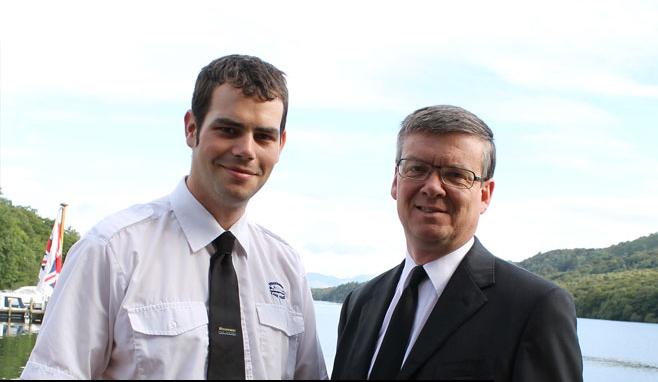 One of the youngest ever Boatmasters of a Windermere ‘steamer’ has made the national shortlist in a competition to find VisitEngland’s Tourism Superstar 2016, supported by the Daily Mirror.

The campaign recognises the dedication and passion of those working in the tourism industry and is awarded to an individual who goes above and beyond the call of duty to ensure visitors to England have an unforgettable experience.

VisitEngland has just revealed details of the national finalists for 2016, with Cumbrian boatman Rob Beale making the top ten who will go forward to a public vote. 27 year old Rob, who lives in Kendal, is the only nominee in the North West to make the shortlist.

Rob started working for Windermere Lake Cruises in 2008 and is one of the youngest employees to regularly skipper an historic ‘steamer’ on England’s largest natural lake. An avid photographer of Windermere and the surrounding area, he is a keen researcher into the Lake District’s proud boating heritage and has also written three books on the history of Lakeland steamers.

Rob Beale says, “I’m a bit stunned, but also honoured to be nominated by VisitEngland. I know I’m the only person from Cumbria on the national shortlist, so I’m proud to be flying the flag for the North West of England. It’s another great opportunity to show the rest of the country what a great place this is to visit.”

CEO of VisitEngland, James Berresford says, “Showcasing the passion and commitment of highly skilled individuals within the English tourism industry, is precisely why Tourism Superstar 2016 will be a success. This award recognises the people on the ground who meet and greet visitors on a daily basis, and whose consistent vision and dedication ensures that visitors to England have a memorable and fulfilling experience.”

Managing Director at Windermere Lake Cruises, Nigel Wilkinson, adds, “We’re really pleased for Rob. Not only does he have an in-depth knowledge and passion for Windermere and the Lake District as a whole, but his friendly, easy-going nature means he knows how to put our passengers at ease. Recently married with three young children, we still can’t work out when he’s found the time to do his boating research, write his books and continue giving numerous talks to community groups on local history.”

The Daily Mirror will host an online public vote from 16 January 2016, which shows a short film of all Tourism Superstar nominees. Readers will then be able to vote for their favourite.

The winner will be announced during English Tourism Week (5-13 March 2016) and will be invited to accept their title at the VisitEngland Awards for Excellence.