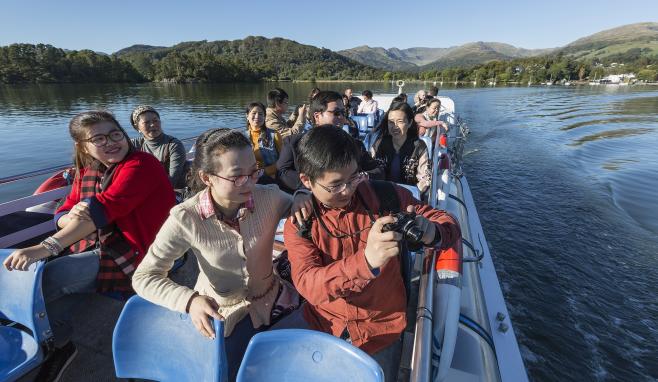 Windermere Lake Cruises is marking this week’s Chinese New Year celebrations by revealing the number of Chinese visitors being welcomed by the attraction has reached a record high.

Both independent travellers and those visiting as part of larger groups have increased by a massive 286% since June 2016. Figures also show a year-on-year rise in the number of tickets being booked online from China, rising by 32% in 2016, increasing to 59% in 2017 – and jumping to 70% in 2018.

English Lakes Hotels Resorts & Venues – who work closely with Windermere Lake Cruises, as part of the English Lake District China Forum also reported an 85% increase in Chinese bookings across their properties since 2016.

Figures from Lakeside and Haverthwaite Railway have also reported overall group ticket sales with China rose by 11% last year, with Chinese advance bookings up by 6%.

The English Lake District China Forum – a group of businesses from right across the World Heritage National Park work together to promote the area to Chinese visitors. One of the effective routes to the Chinese market for the group has been the popular Chinese social media platform, ‘Weibo’ - which in recent weeks has seen an increase in engagement among users of 71%.

Windermere Lake Cruises’ Sales & Marketing Director and Chair of the English Lake District China Forum Jennifer Cormack, says, “We’ve also noticed that huge numbers of independent travellers aren’t booking tickets in advance, but just turning up on the day. That does make it impossible to monitor the numbers exactly, however the increase in the number of Chinese leaflets that are taken each day and just observations from the staff, show that the increase has been huge over the last few years.”

Since 2015, Jennifer has been to China seven times to network with Chinese tour operators – most recently as part of a delegation with Windermere Lake Cruises and English Lakes Hotels Resorts & Venues, where they participated in a 12-day visit to three different Chinese cities. During the visit, they took part in more than 200 separate meetings with representatives from Chinese tourism companies at business-to-business ‘matchmaking’ events.

Jennifer added, “We’re so happy to be able to mark Chinese New Year with these great figures. We work really hard to enhance the cultural understanding between China and the UK and we’re confident our efforts will help to continue our success and drive our appeal to overseas markets even further forward in the coming years”.