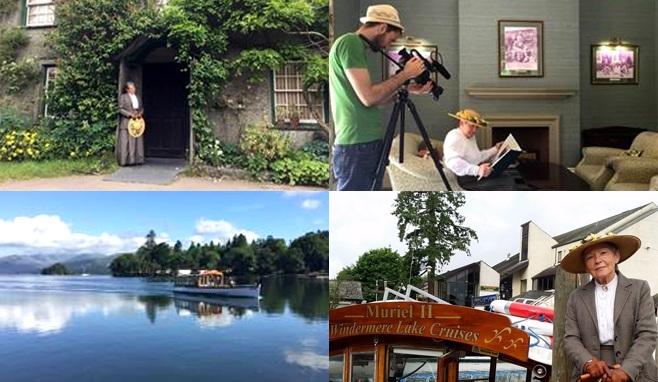 Ahead of celebrations to mark 150 years since Beatrix Potter’s birth (28 July 2016), a group of Lake District businesses have unveiled a sneak preview of a short film they have produced in her honour - and hope to use it to promote the Lakes to potential visitors across the globe.

The new film is the brainchild of hotelier Alison Magee-Barker, who is the General Manager of one of Beatrix Potter’s former homes, the Lindeth Howe Country House Hotel. She was inspired by suggestions from regular guests including the great-grandchildren of Beatrix’s former governess, Annie Carter.

Alison has been working alongside Windermere Lake Cruises, the Lakeland Motor Museum and The National Trust to create the six-minute showcase of how Beatrix Potter would have spent her birthday in days gone by. The businesses have joined together to create some inspirational footage which can not only be shared online and on social media, but will be screened at events and trade shows targeting key visitor markets including the Japanese and Chinese.

The six-minute ‘day in the life’ film sees Beatrix played by Judith Notley, who is already the face of the famous children’s author at the World of Beatrix Potter Attraction in Bowness. The storyline shows her making her way from the National Trust’s Hill Top across the tranquil waters of Windermere in a traditional Lakeland ‘launch’, before being transported to Lindeth Howe in a vintage 1925 Humber borrowed from the Lakeland Motor Museum.

The movie was filmed, co-directed and edited by Naik Media. Further scenes depicting the writer’s love of sketching and gardening are framed by spectacular aerial footage of Windermere filmed by Skylark Aerial Photography,

The filming took place over three days last month, starting at 5am. To make every aspect of the production as as possible, a team of around 30 people were assembled ranging from Windermere Lake Cruises’ boat skippers and maintenance crew to gardeners and a chef for the quintessential Lakeland afternoon tea. One sequence even includes a cameo from Motor Museum Director, Bill Bewley, as Beatrix’s chauffeur for the special day.

Hotelier Alison Magee-Barker also directed the film. She says, “I had the seedling of an idea for this film back in 2011, when a guest described how Beatrix Potter would often sail across Windermere to come and see her mother. I’m so pleased that in the anniversary year of her birth, we’ve been able to turn that dream into a reality. The finished film will be a great tribute to one of our most famous authors, as well as being a great promotional tool to help showcase some stunning scenes of the Lake District landscape which inspired her.”

Bill Bewley is Director of the Lakeland Motor Museum and Group Chairman for Winander Leisure. He says, “I’m often asked to do projects like this involving our vintage motor cars, but rarely take part. For me, what makes this film special is the fact that it brings the Lake District Beatrix Potter would have known to life in a very authentic and affectionate way. I am delighted that the splendid 1925 Humber open top tourer could play a starring role too.”

There will be a special VIP screening of the film at the Lindeth Howe Country House Hotel on Thursday 21 July, with the final production officially launched on YouTube on 28 July to mark the famous birthday.