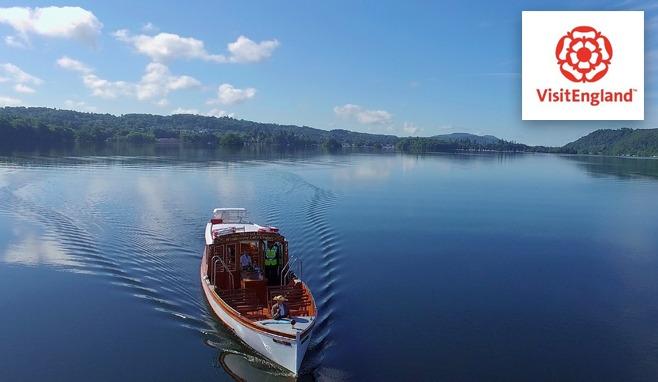 Windermere Lake Cruises has underlined its place as one of the country’s most popular ‘paid for’ visitor attractions, according to official figures revealed in VisitEngland’s latest Annual Attractions Survey.

Out of the 1500 English attractions in the survey nationally, Windermere Lake Cruises features at number six on the list of ‘paid for’ visitor attractions – ahead of other iconic attractions including Stonehenge, London Zoo and the Eden Project. It is the only Cumbrian attraction, and one of just five outside London, to appear in the top ten.

The latest figures show there were 1,482,899 passenger journeys on the company’s 16-strong fleet of ‘steamers’, modern launches and wooden launches during 2015. That’s a 0.9% increase on the previous year.

It’s a double celebration for parent company Winander Leisure, with Windermere Lake Cruises’ sister attraction - the Lakeland Motor Museum – also making an appearance in the regional (North West) top 20. The Motor Museum welcomed 81,564 visitors during 2015, which is not only up 2.9% on 2014 but is the highest annual figure in its 38 year history.

Managing Director of Winander Leisure Ltd, Nigel Wilkinson, says, “We’re proud to see that Windermere Lake Cruises has maintained its position as one of the top ten most popular paid for visitor attractions in England, alongside some other truly world-class attractions. These latest figures underline the enduring appeal of the Lake District and show that a cruise on Windermere really is regarded as a quintessential experience for both domestic and international visitors. It’s also heartening that we achieved this level of passenger numbers in 2015 despite the challenges we faced locally at the end of last year.

He adds, “The Lakeland Motor Museum also performed well and is a great example of another all-year-round attraction which continues to broaden its appeal and attract new visitors year on year. Now, we look to the future as we continue to build our customer base for both businesses and help to drive our vitally important tourist economy.”

For full details and rankings in the Annual Visitor Attractions Survey 2015, visit the VisitEngland website.