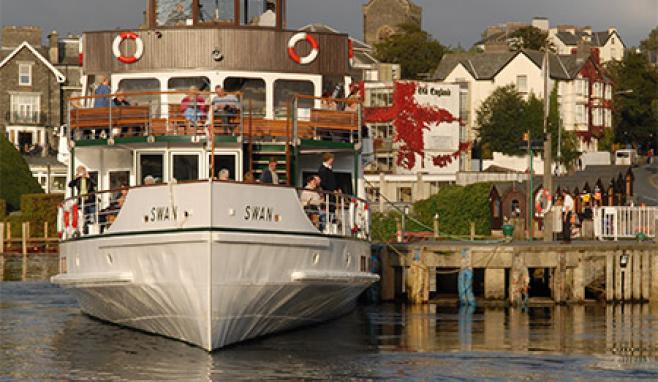 New figures released in August, confirm that Windermere Lake Cruises is officially one of the England’s top ten ‘paid for’ visitor attractions – and one of only four attractions outside London to make the list, based on passenger numbers.The latest Annual Visitor Attractions Survey collated by the national tourism body VisitEngland reveals that there were 1,411,995 passenger journeys on the company’s 16-strong fleet of ‘steamers’, modern launches and wooden launches during 2013.

That’s a 13.2% increase on the previous year, placing the company sixth on the list. Nationally, visits to attractions in England increased by 5% over the same period.

It means that Windermere Lake Cruises ranks alongside iconic attractions such as the Tower of London, Stonehenge and Westminster Abbey. It is also the only Cumbrian attraction – and one of just a handful outside London - to appear in the top ten. Chester Zoo is the only other North West attraction to make an appearance.

The full top ten paid for visitor attractions in England in 2013, according to VisitEngland, were:

Nigel Wilkinson, Managing Director of Windermere Lake Cruises, says: “We are pleased that following a difficult season in 2012, visitor numbers recovered in 2013 and that Windermere Lake Cruises has maintained its position as one of the top ten most popular paid for visitor attractions in England. Tourism makes a vital contribution to our regional and national economies, particularly in rural areas such as the Lake District National Park, and having such a popular attraction in the heart of the Lakes delivers both direct and indirect benefits to the local economy.”

For further details of the Annual Visitor Attractions Survey, visit the VisitEngland website.