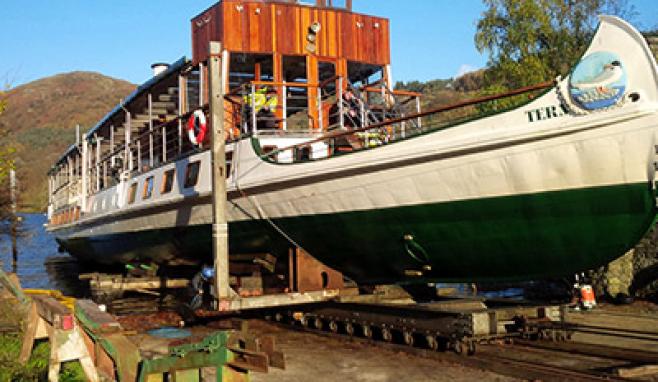 Windermere’s oldest and most iconic vessel, MV Tern, is undergoing a makeover, as crews from Windermere Lake Cruises don their boiler suits over the winter months.

Tern was built in 1891 and has operated on Windermere for more than 120 years. Included on the National Historic Ships Register, she had the honour of carrying the Olympic Torch in 2012 and has an illustrious history as arguably the Lake District’s best-known passenger ‘steamer’ throughout the 20th century. Tern will undergo a thorough overhaul and refurbishment, including the replacement of the hull plates which underpin the body of the boat.

It’s all part of Windermere Lake Cruises’ annual winter maintenance programme, which will also see four of the company’s modern launches get some extra care and attention. Between now and February, Silverholme, Lakeland 2, Cumbria 1 and Cumbria 4 will be rotated out of service for refurbishment work.

The majority of the work will be carried out by full-time staff who spend their summers employed as master, mates and engineers on board Windermere Lake Cruises’ full fleet of sixteen vessels. But with reduced services during the winter, it frees them up to get involved in a completely different side of the business.

Many of the maintenance teams are fully qualified welders, electricians, engineers and painters, with some previously employed by Barrow’s BAE Systems building nuclear submarines for the Royal Navy. Others have learned the boatbuilding skills from the ‘old hands’ passed down the generations of craftsmen working for boating companies on the shores of Windermere.

John Woodburn, Operations Director, says, “We’ve got a highly skilled and flexible workforce, and the team really enjoys getting involved in our winter maintenance programme. It’s a complete change of role from the main summer season and the team are particularly proud to be keeping some of the Lake District’s most historic vessels shipshape – not just for next year’s visitors but for generations to come.”

“Of course, we still have the majority of our boats in service throughout the winter. People don’t always realise that we continue sailing every day except Christmas Day, and the winter months are a spectacular time to see the lake and its wildlife.”