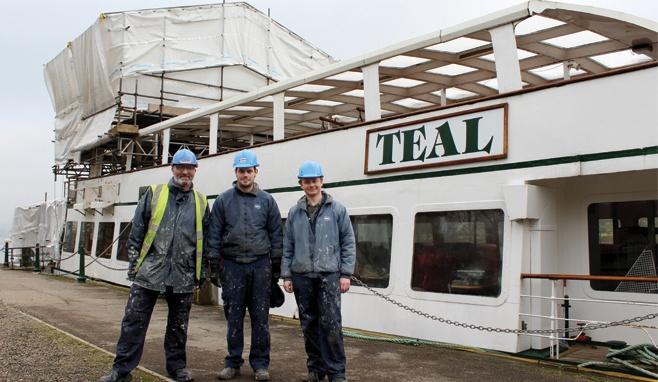 Crews from Windermere Lake Cruises have donned their boiler suits to give the largest ‘steamer’ ever to sail on the lake a new lease of life.

A member of the National Historic Fleet, MV Teal was originally launched in 1936 to carry more than 530 passengers and has twice welcomed Her Majesty the Queen on board, most recently in 2013. Now one of the Lake District’s most recognisable vessels is getting a major make over, including a brand new generator engine, a new front deck and a refurbished bridge.

The work is part of Windermere Lake Cruises’ annual winter maintenance programme, which will also see one of the traditional wooden launches ‘Queen of the Lake’ and a modern waterbus ‘Cumbria III’ get some extra care and attention. Queen of the Lake also has Royal connections, having taken part in the Queen’s Diamond Jubilee Pageant on the River Thames in 2012.

The majority of the work is being carried out by full-time staff from Windermere Lake Cruises who spend their summers employed as master, mates and engineers. Many of the maintenance teams are fully qualified welders, electricians, engineers and painters, with some previously employed by Barrow’s BAE Systems building nuclear submarines for the Royal Navy. Others have learned the boatbuilding skills from the ‘old hands’ passed down the generations of craftsmen working for boating companies on the shores of Windermere.

John Woodburn, Operations Director at Windermere Lake Cruises, says, “The team really enjoys getting involved in our winter maintenance programme, which this year includes the largest ever vessel to sail on Windermere. It’s a complete change of role from the main summer season, but we have a highly skilled and flexible workforce and this work is an important part of our commitment to preserving some of the country’s most historic vessels for future generations.”