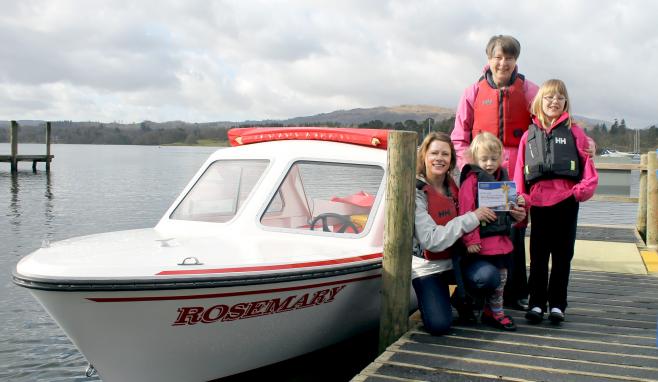 Ahead of Mother’s Day, this Sunday 15 March, one deserving Cumbrian mother and grandmother has been given the unique honour of having a new vessel on Windermere named after her.

Rosemary Tate, age 69 from Carlisle, has had her name immortalised on one of Windermere Lake Cruises’ new Ambleside-based electric motor boats, after winning a competition to have one of the fleet christened in her honour. As part of her prize, Rosemary and her family steered the newly-christened boat on its maiden voyage around England’s largest natural lake.

Rosemary was nominated by her daughter Helen, who explains why she entered on her mum’s behalf. She says, “My mum will be 70 in April and has had a difficult few months. My dad suffered a serious stroke last September, spent a few months in hospital and is now in a care home. This means she has been left at home alone for the first time in almost 50 years. She is a fantastic mum and nana, and continues to visit my dad every day. This honour is a wonderful boost for her, as well as an amazing birthday present!”

Rosemary adds, “I was totally taken aback, but thrilled, to be awarded such an unusual and lasting prize. How special, too, to celebrate this unique honour with my daughter and grand-daughters joining me for the maiden trip on board my namesake, ‘Rosemary’. Thank you!”

James Ventham, from Windermere Lake Cruises, says, “In line with maritime tradition, all six of the new eco-friendly motorboats have been given girls’ names. Although five of the vessels had already been named by members of staff, we wanted to give one family the chance to give their mum a unique Mother’s Day gift. Rosemary is definitely a worthy winner, and we’re so pleased to immortalise her in this way.”

Due to the volume and quality of entries, the small panel of judges from Windermere Lake Cruises also decided to reward 21 other families with a special ‘Family Freedom of the Lake’ pass available to use on scheduled services.