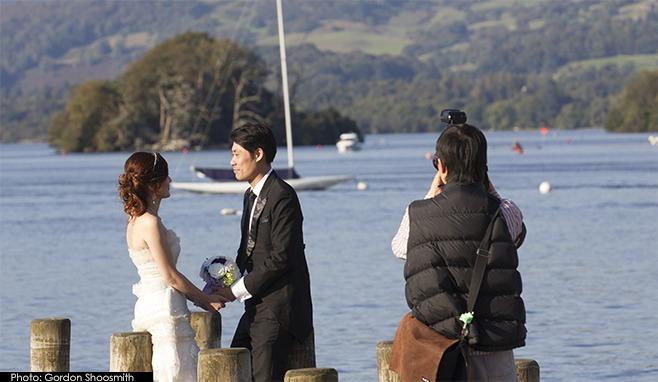 The iconic backdrop of England’s longest lake is becoming increasingly popular with Chinese couples posing for dramatically-staged photos in front of major British landmarks in their full wedding attire.Pre-wedding photo shoots are a huge industry in China, with many young couples already choosing to travel abroad and have their pictures alongside famous locations like Westminster Bridge and St Paul's Cathedral.

Now Cumbria’s most visited tourist attraction, Windermere Lake Cruises, says it is seeing an increasing number of enquiries from Chinese couples exploring outside the Capital and heading to the Lake District for the traditional pre-wedding snaps.Typically, the newly-weds-to-be want to celebrate their engagement with a photo shoot on Windermere and a mini cruise on the lake. Windermere Lake Cruises has also recently started working directly with a pre-wedding shoot company in London to help bring more Chinese couples to the Lakes.

“It is a well-known Chinese custom for couples to have their wedding photos taken before they are married, but up until now, this tradition has been largely confined to famous London landmarks.It’s fabulous to see that an increasing number of couples are choosing to include Windermere and the Lake District as part of their pre-wedding photo shoots. It really does show that a ‘steamer’ cruise in the Lakes has a truly international reputation and Chinese couples are embracing it as a must-do experience.”

“The recent introduction of direct flights from Beijing into Manchester now makes it easier than ever before for Chinese visitors to explore the UK’s northern regions. So we are looking forward to welcoming many more brides and grooms to be to the waters of Windermere.”

All of our boats are available for a private cruise on Windermere, perfect for a wedding breakfast, celebration or photo-shoot. See our Private Hire web pages for more details.