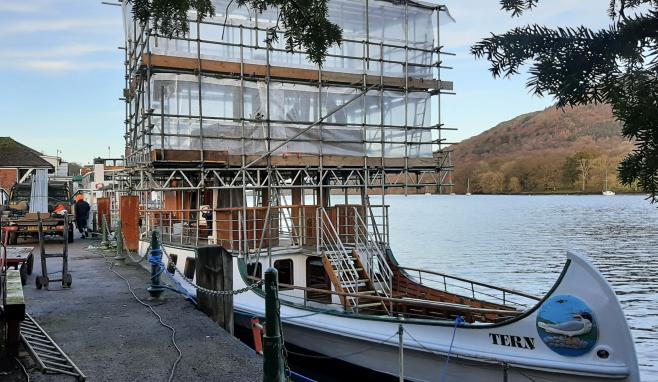 One of our most iconic vessels is being given a facelift in the form of a brand new navigation bridge, in time for the summer’s 130thanniversary of the boat’s launch onto the lake.

Originally to be named ‘Swallow’, a last-minute change of heart resulted in the vessel being named ‘MV Tern’ and has since become our oldest surviving boat. Launched in 1891 with an originalpassenger capacity of 633, MV Tern still sails today as the flagship of the Windermere fleet.

Tern’s current bridge has been in-place for the last 30 years, having been installed in 1991 when the vessel was substantially re-arranged to celebrate her centenary year. Prior to that, the bridge was positioned halfway along the boat.

Work is now underway on the 120-tonne craft at our Lakeside Pier, with scaffolding erected around Tern’s existing bridge to enable work to begin on stripping out the electrics before replacing the structure in March of this year.

Windermere Lake Cruises Operations Director, John Woodburn, says, “The new bridge will be slightly wider to allow more space for Wi-Fi, amplifiers and modern electrical systems. It’s not the first redesign of the bridge, with Tern being fitted with a wind buffer for the skipper when converted to diesel over the winter of 1957/58, as well as a full wheelhouse in the early 1960s. It’s safe to say that Tern is certainly no stranger to tweaks and improvements! We’re really pleased that 130 years since her launch, MV Tern still graces the surface of England’s longest lake, providing Cumbria with its most successful heritage attraction. Between Tern and our brand new vessel, MV Swift which we launched last year, both vessels provide a fantastic reminder of just how much boating history there is to celebrate here.”

MV Tern was built by Forrest & Son, Wyvenhoe, Essex in 1891 and is 145ft in length and just 18ft wide. With a crew of four, Tern can reach a speed of 10 knots with its 2x 6-cylinder Cummins diesel engines, 2x auxiliary generators and bow thruster.