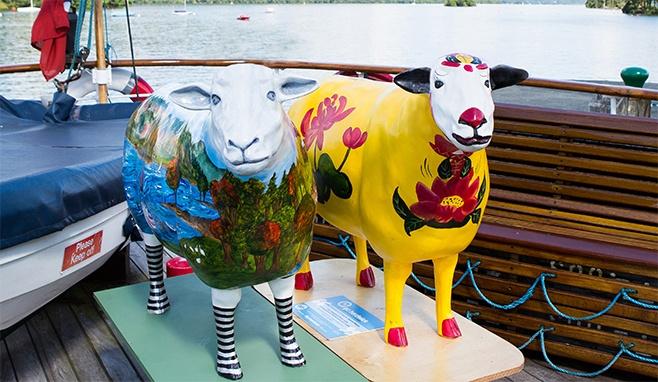 Are these the most travelled sheep in the Lake District?

A pair of unique art exhibits - located on board two historic Windermere ‘steamers’ as part of the Calvert Trust’s Go Herdwick public art trail - have clocked up 10,000 miles on their travels up and down England’s longest lake over the summer.

The colourful life-sized sheep are named ‘Blue Ewe’ and ‘Guo Se’ (which means ‘national beauty’ in Chinese) and were designed for Windermere Lake Cruises by Cumbrian artist Karen Lester. They were part of the 50-strong flock appearing in an array of unexpected places across the South and Central Lakes to raise money for the Calvert Trust.

‘Blue Ewe’ and ‘Guo Se’ boarded the vessels in March and on the final day of the Go Herdwick trail, Sunday 4 September, it was revealed that the sheep have sailed at least 10,000 miles between them. As well as daily scheduled sailings, that includes wedding receptions, private charters and evening buffet cruises as the sun goes down.

John Woodburn, Operations Director at Windermere Lake Cruises, says, “We’re proud to have brought these unique pieces of art to Windermere, particularly for such a good cause. Blue Ewe and Guo Se are the only sheep on the Go Herdwick trail that have literally been on the move throughout this special outdoor exhibition and have certainly created a talking point for passengers as they sail around Windermere.”

After the end of the art trail project, the sculptures will be sold in aid of the Calvert Trust along with their fellow Herdwick ewes at the charity’s Grand Gala Auction at the Low Wood Bay hotel in October 2016.