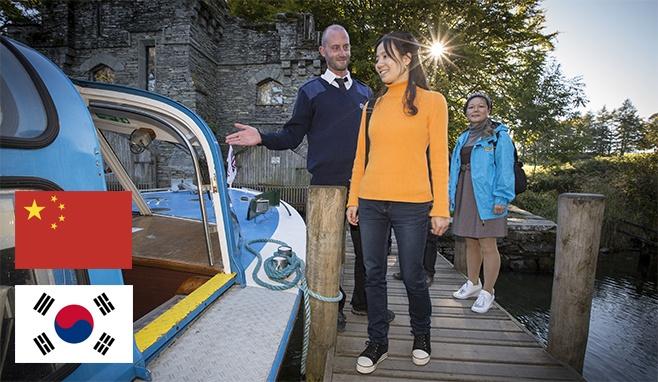 Windermere Lake Cruises is among a group of tourism businesses heading for China and South Korea, to encourage more visitors from these fast-growing Asian markets to make the English Lake District their destination of choice.

The intensive nine-day trade mission will include a three-day ‘Destination China’ event (21-23 November) arranged by VisitBritain to help British destinations, products and suppliers to do business with top tour operators.

As well as meeting more tour operators as part of the official VisitBritain event, the Lake District businesses will be undertaking a separate series of office visits and one-to-one appointments to build relationships with tour operators selling direct to potential Chinese visitors.

They will also be promoting other members of the Lake District China Forum and highlighting the recent launch of Hainan Airlines’ direct flights into Manchester Airport, alongside partners from Marketing Manchester.

Jennifer Cormack is Chair of the Lake District China Forum and Sales & Marketing Manager at Windermere Lake Cruises. She says, “As a company, China has emerged as our biggest overseas market over the past 12 months and many partner businesses on the Lake District China Forum have seen similar growth. As a group of businesses representing the Lakes, we feel it’s vital to get this face-to-face contact with key suppliers and buyers on their home turf, in order to keep building the reputation of the Lakes internationally and win new tourism business.”

She adds, “This is also the first time we have been to South Korea. We know there is an increasing demand from Korean travel trade to include British products on their itineraries, so this is a fabulous opportunity to forge new relationships there too.”

The trade mission will come hot on the heels of Windermere Lake Cruises’ involvement in hosting a Chinese delegation visiting the Kendal Mountain Festival later this week (17-21 November 2016). A group of government officials, filmmakers and bloggers will be welcomed on board a traditional Windermere launch as part of a jam-packed itinerary to showcase the Lake District and help develop adventure tourism from China to Cumbria.