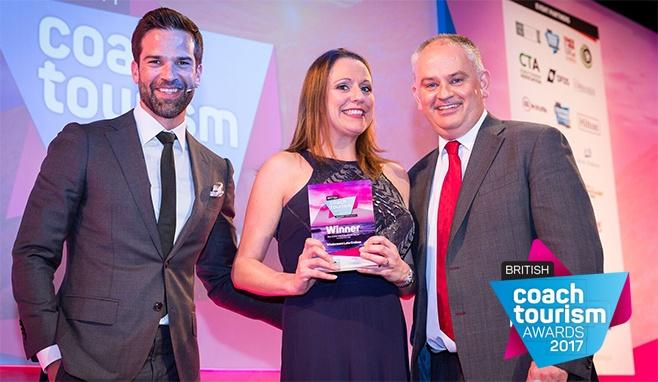 We sail away with a prestigous national award

We are delighted to have won a national accolade at the British Coach Tourism Awards, which recognises excellence and innovation across the coach tourism industry.

In April 2017, we were unveiled as the winner of the ‘Sea, Canal, Inland Riverboat Carrier’ category, beating off seven other finalists including some of the world’s leading operators such as P&O Ferries, Irish Ferries, DFDS and Eurotunnel le Shuttle Coach.

Windermere Lake Cruises hosts 1.4 million visitor journeys every year and a large part of this business is focused on the group travel market.

There was further success at the awards for the Lake District with Lakeside and Haverthwaite Railway also scooping the prize in the ‘Heritage Railway’ category.

The judges at the British Coach Tourism Awards were looking for a winner which demonstrated a commitment to welcoming coaches, coach groups and coach drivers, together with evidence of how the company has developed over the past 12 months.

The awards presentation at the National Motorcycle Museum in Birmingham was hosted by TV presenter and broadcaster Gethin Jones.

Sales and Marketing Manager for Windermere Lake Cruises, Jennifer Cormack, was on hand to receive the award. She says, “We were up against some strong contenders, but groups are a huge part of our business and this award reinforces that the hard work we do to welcome coach operators to the Lake District is really appreciated. In particular, the coach park team deserve a special mention for the excellent service they provide on a daily basis.”