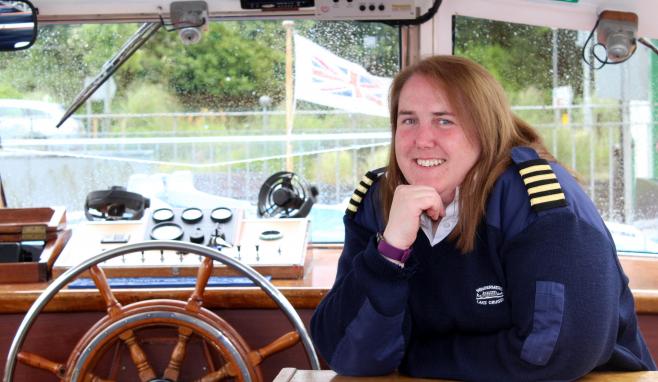 Windermere Lake Cruises has welcomed Cath Wilson to its team of boat skippers, after passing her test under the watchful eye of examiners from the Maritime and Coastguard Agency (MCA).

Following a successful test on Thursday June 13, Cath has become the attraction’s fifth currently-active female skipper to be in charge of Class 5 vessels – and the second female skipper to pass the test since the beginning of the year.

Cath worked for Windermere Lake Cruises in a variety of customer service roles since 2015 before making the decision to move from dry land to water.

Speaking shortly after being awarded her epaulets, Cath said, “I’m thrilled to have passed, because there’s no job I’d rather have than working on and around this lake. I initially thought it might be a good idea to take the test so I could fill-in for other skippers if required, but now it’s my full-time role and I couldn’t be happier”.

MCA officials were especially impressed with Cath’s achievement due to extra challenges posed by damp and windy weather during the test. However, Cath took the choppy conditions in her stride, continuing, “To be honest I prefer it when there’s a bit of a challenge, as I consider that to be another chance to hone my skills. I do consider myself to be a very competent all-weather skipper and thankfully, clearly the MCA agrees!”

Windermere Lake Cruises HR Manager Ian Wilkinson added, “We all went down to Cath’s boat as soon as we’d heard she’d passed her test, because she’s been such a great colleague over the last four years.

“Traditionally, the vast majority of people who apply to become a Windermere Lake Cruises vessel skipper are men, so it’s really great that Cath is further strengthening our crew of women. We’re so proud of her and look forward to working with Cath for many years to come.”